She hadn’t arrived yet, so he quickly cut through the grass and hid behind a tree.  They’d never met like this before, and his nervousness played out by picking up blades of the long grass around him, and weaving them together.  After a few minutes, and a sturdy foundation to whatever he was making in his hands intact, he heard her soft melody of humming and singing.  Peeking around the tree, he watched her go inside the gazebo and sit on the bench to wait for him.

As he darted behind two more trees quietly, still weaving the grass in his hands, picking up blades as he moved, he kept his eyes on her.  He picked up one more blade of grass, tightening the weaves he had made. The piece was flat, and he creased it in spots to fold it into a quick shape.  Popping open  his pocket on his belt, he put the folded creation away and slowly crept through the opening slats on the gazebo.  His body halfway through the slats, thinking he was being slick, and with her back turned to him, she sang, “I know you’re there…” and continued humming.

His face almost looked grumpy a moment as his plan didn’t work really, and he just rolled the rest of the way in, landing at the center of the gazebo.  “Fine then,” he said smiling up at her as she moved from the bench to sit down with him.

They sat there a while, talking and reminiscing about various things.  The stressful times and circumstances in their village when they first met.  The friendship they found in each other one day when they were listening to music in the square.  She even teased him for always wearing his uniform, and needing to branch out into colors.  The tense times from their lives were finally easing up though, which is why they decided to meet on this day, at this time.

The evening wore on, and everything just felt so natural.  So right.  Pure.  Like one of those times where it’s too good to believe.  But she was there… He felt her in his arms and against his body. The scent of lilacs from her hair and skin filled his nostrils.  Watched her eyes light up and tasted those lips that always smiled up at him.  Then, they both listened to the rhythm of their hearts beating and danced to their own music.

The sounds of the forest were waking up the evening moon, and they were still there, enjoying each other’s company.  Just being.  She was in front of him; both of them facing the same direction, when she felt him move his arm from about her waist momentarily.  Next thing she knew, in front of her was a green, grass-woven flower; layers of petals.  It was like a small piece of art.  His other hand reached for her right wrist, turning her hand palm up, and placed it on her hand. 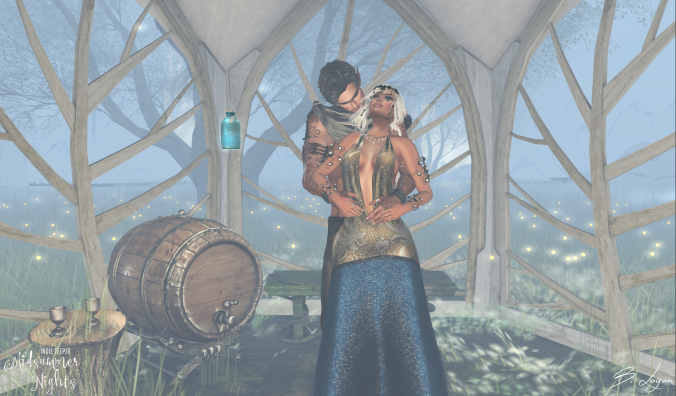