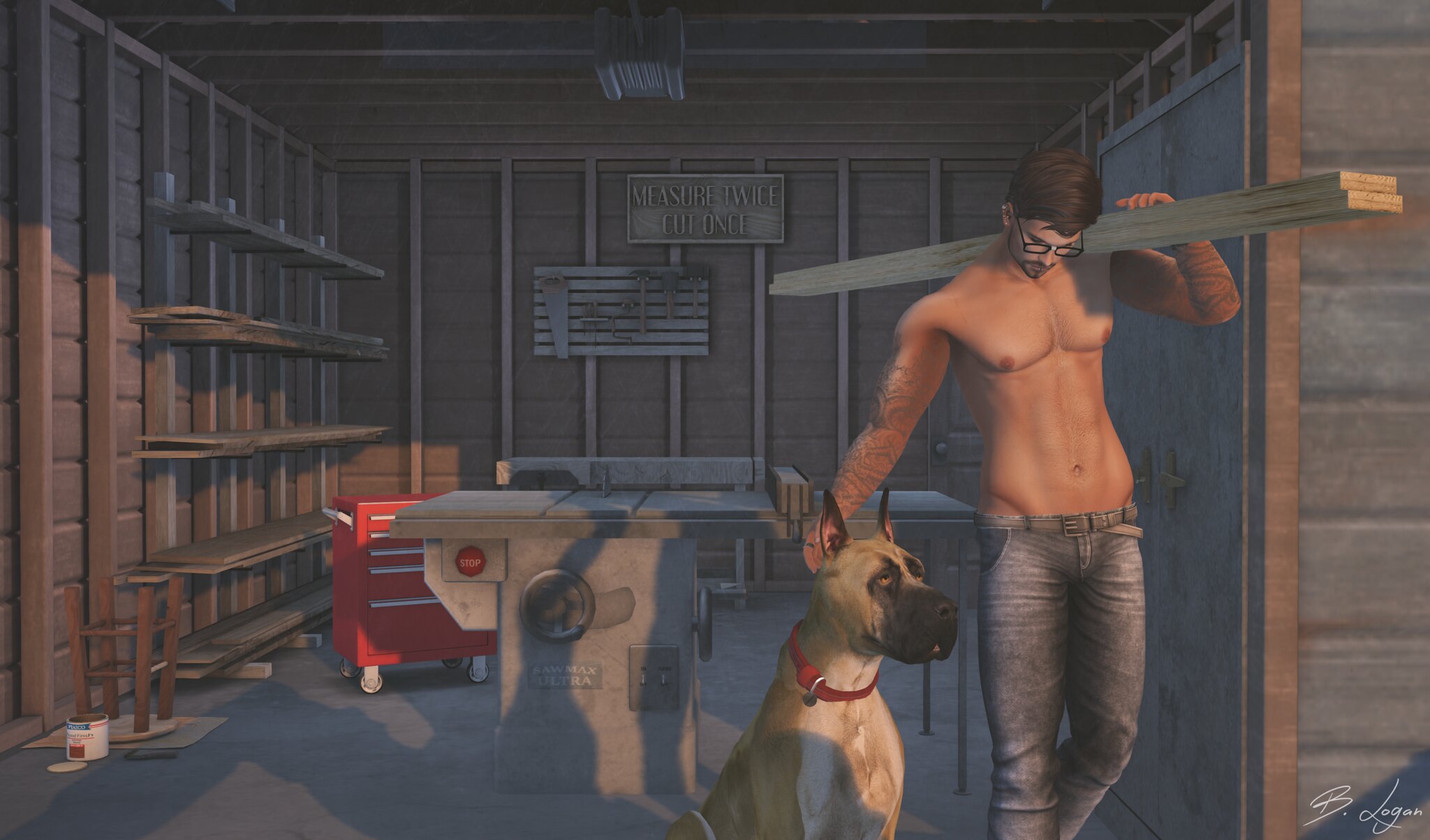 He tossed his goggles back up on his work bench, and leaned his hands against his table saw, hanging his head between his shoulders.  It was the last cut he would make for the day, as the sun was setting and he soon wouldn’t be able to see what he was working on.

“Measure twice, cut once, Hugo,” he said to his dog.  Hugo was laying down in the remaining sunlight and barely raised an eyebrow or ear acknowledging him.  Picking up the pieces of wood, he hoisted them over his shoulder and whistled for Hugo to sit up and follow.

As he walked to the site where the concrete would be poured, he couldn’t help but think about that saying again.  He had been teased for being called Mr. Cautious before, and chuckled at that.  It never hurt to make sure you knew what you wanted to do before doing it though.

The dream is free. The hustle is sold separately.
– Anonymous –

Leaning against the counter she looked at him and grinned.  “You know what I will ask you.”

Glancing back at the clock, and being the smartass he was, “I still have thirty-two minutes to be a better person than I was a year ago.”

She chuckled and shook her head.  “Mhmm… And what about the new year.  What will be your resolution for it?”

Setting his glass  of champagne down on the counter, he pushed up off of his spot and stepped closer to her.  His hands went to her thighs and forced her against the counter more.  He was looking in her eyes, holding her gaze as he pushed his hand up, raising her skirt some. Pressing himself against her, he gently laid his forehead to hers, and spoke low and intentional.  “My new year’s resolution is to do you more and do me less.”

The holidays are here!  Time to give and receive gifts!!  Wait… What?

You know it’s true though.  It’s not even a bad thing, but… What are you giving?  I’m not going to lie.  I do love gifts. *grins!*  BUT – as lovely as the unwrapped tangible item may be, what really means the most to me is that someone spent time to think about me and select something specifically.

Time… I think it comes down to time.  It’s the most expensive gift you can give someone. You can’t purchase more.  You can’t get a refund.  It can come in the form of a prayer or good thought sent out for you.  Physically spending time with you.
Listening to you.  Even putting thought into a gift for you to unwrap.

Time is precious my friends.  Waste it wisely.

Happy holidays to you and yours!!

“We have so much time and so little to do.  Strike that, reverse it.” – Roald Dahl –

He was sitting in a comfortable wing-back at the Calendar Club, puffing on a fat Cuban cigar.  He didn’t own the place, but… He owned the place.  If you were looking at him, and didn’t see the other man lean down to whisper something in his ear, you would have never known he even received any news.  Certainly not any news needing his immediate attention.

Folding the newspaper he was reading and casually leaning forward to put out his cigar, he stood up, brushing his suit straight.  He turned on his heel and flipped his Bogart style hat in his hand from off the back of his chair, before situating it on his head.  Giving a nod, no words, to his fellas, he strode towards the exit of the club.

Once outside, he popped the trunk on his La Salle, picked up his Tommy, and headed to his Deusenberg. Looking up at the blue skies as he got into the car, he thought about how he had been waiting for this opportunity for a while now.  He knew they wanted him.  His business.  His success.  Not their own, but his.

Pushing the car into drive, and speaking to the men already in his car, “Not today fellas.  Not today.”

There’s something to that stark, cold air that invigorates and cleanses the mind.
An icy wash of clarity.
However, like many good things, too much and you may end up rigid.

He had prepared things.  Made plans.  They took time.  Effort.
Then she showed up.
Nothing else mattered.

Nothing beats being relaxed and feeling stress-free.  Sometimes, you have to be intentional about it, whether you do it alone or with your significant other.
Or, perhaps you just want to bring along someone because they’re a brat and you’re a glutton for punishment…. and they’re pretty.  *grins*

“Loving you is my favorite adventure.”
-Unknown-