Mr. Curtis climbed the ladder up to the lighthouse.  He was bored at the moment, and decided to explore the public cabin Ms. Fox and him were lounging in, in Cancun.  Ms. Fox was being lazy, and reading a magazine or something out on the dock, getting some sun.  Whatever… His options to take more than his share were still in the back of his mind.

Mr. Curtis had trouble trusting people.  Or maybe it wasn’t ‘trouble’ but just that he had been burned so many times when he thought he could trust someone.  Experience.  Wisdom.  He never closed doors or windows.  Options were options.

He reached the top of the lighthouse and stepped outside onto the circular balcony.  The sun was beginning to set, and it was almost time to put his plan into action.  Turning around, he hunched over and leaned his elbows on the railing.  He was right above the boat that him and Ms. Fox were about to board and crack a safe on.  They were just waiting out the senator and his family to head to the boardwalk for dinner.

Mr. Curtis’ eyes dropped down, seeing Ms. Fox still laying on the dock with her feet propped up.  Time to wake her up.  He quickly headed back down the ladder of the lighthouse, stepped outside of the cabin and walked over to her.  She didn’t seem to notice his presence so, he took his eye glasses off and quietly sat them down next to her, and…….

Mr. Curtis had leaped over her body, and cannonball’d as close to the dock as he could.  As he came back up to the surface of the water and wiped the water from his face and pushed his hair back, he grinned at her.  Swimming back to the dock to retrieve his eye glasses.  Ms. Fox uncrossed her legs calmly, setting her feet down and sat up.  She was obviously a victim of his cannonball.  He went to reach for his glasses but she snatched them up in her hand as she crossed her legs under her.  He looked up at her angrily, “Hey…. You know I’ll need those for this.”

“Afraid you’ll miss out on seeing something?  Don’t trust me to be your eyes?” she asked.

“You know damn well I need those to….unlock…. the…..,” he slowed down because she actually began to hand them back.  That was not like her to give up so easily.  He followed her gaze slowly though, as she was looking above him.  Ah…. Time to get to work.  She saw the senator and his family making their way to the boardwalk now.  Their time window was small, so he took the glasses and carefully put them back on.  Turning in the water, he motioned for her to hop on his shoulders.  “Giddy up.” 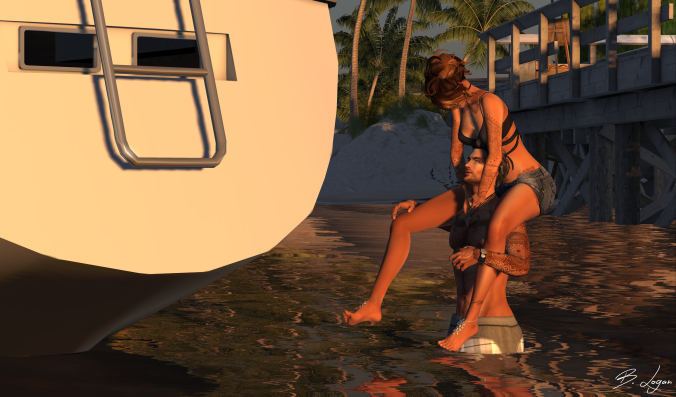