Ms. Fox and Mr. Curtis were taking a casual stroll through a downtown street, with no ulterior motives that day.  She had just mentioned how hungry she suddenly was and Mr. Curtis gulped.  He left his wallet at home, and he was adamant about her leaving her purse behind.  Didn’t want some petty thief to accost her.

As they walked down a set of stone steps into a busier section of town, he was surprised that the square was rather empty.  Once they reached the bottom of the stairs, he saw his opportunity.  Nonchalantly, he slipped her arm that was tucked under his out and slid over to a stool where a musician must have taken a quick break.  He had no idea how long the street musician would be gone, so he needed to act quickly.

Ms. Fox had already rolled her eyes at him and gone to peek into a window of a nearby store, but she turned, with a crazed and utterly embarrassed expression.  Mr. Curtis was…. singing.  Singing badly.  Oh she had to stop him.

Loudly, she whispered, “What are you DOING?!”

Ms. Fox rolled her eyes, and turned her head over her left shoulder.  Her attention was stolen by the smells of the nearby cafe.  That’s when Mr. Curtis rolled his fedora down his arm, switching it with the one on the musician’s stool.  He flipped it up on top of his head quickly, keeping all of the dollars inside, and now, on his head, under his new hat.  His right hand on the front; left hand on the back brim of the hat, he adjusted it on his head and walked back to her, offering her his arm again.  “I’m hungry.  Let’s eat.” 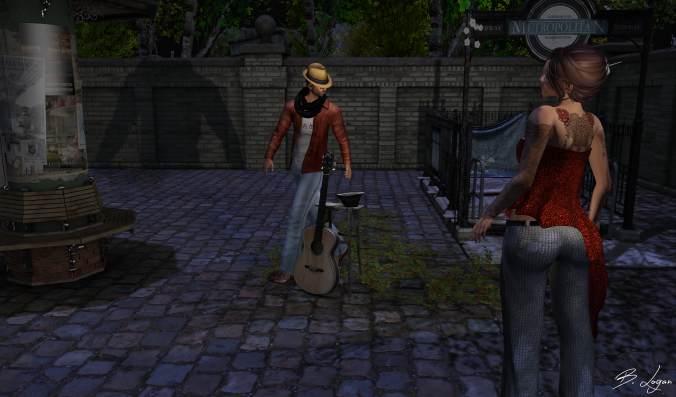 3 thoughts on “A Simple Switcheroo”